Health inequality and the 1918 Spanish flu

Health inequality and the 1918 Spanish flu 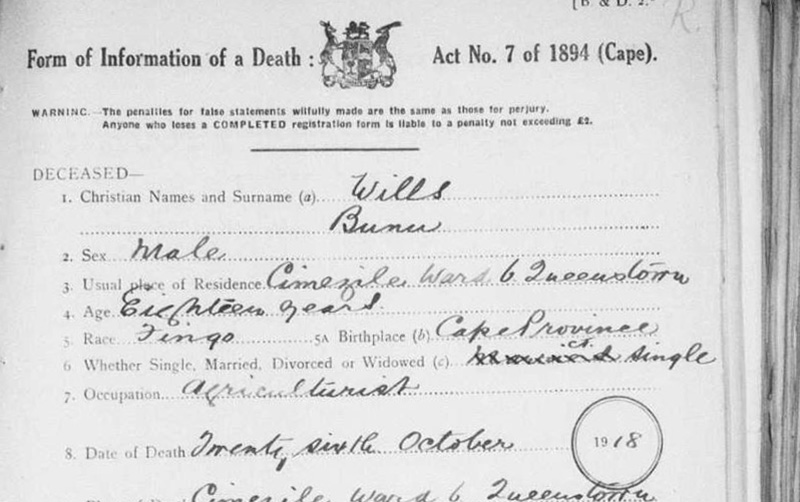 The 1918 influenza – the Spanish flu – killed an estimated 6% of South Africans. Not all were equally affected.

Mortality rates were particularly high in districts with a large share of black and coloured residents. To investigate why this happened, we transcribed 39,482 death certificates from the Cape Province. Using a novel indicator – whether a doctor’s name appears on the death certificate – we argue that the unequal health outcomes were a consequence of unequal access to healthcare. Our results show that the racial inequalities in health outcomes that existed before October 1918 were exacerbated during the pandemic. Access to healthcare, as we expected, worsened for black and coloured residents of the Cape Province. Unexpectedly, however, we found that other inequalities were unchanged, or even reversed, notably age, occupation and location. Living in the city, for instance, became a health hazard rather than a benefit during the pandemic. These surprising results contradict the general assumption that all forms of inequality are exacerbated during a crisis. Our analyses suggest explanations for the widening racial gap in healthcare access during the 1918 pandemic, from both the demand and the supply side. We could find, however, no evidence of racial prejudice. Our findings confirm the importance of taking race into account in studying the effects of the 2020 Covid-19 pandemic or other world crises.
Johan Fourie and Jonathan Jayes.
World Development
Read paper
By admin|2021-03-15T09:14:30+00:00March 15th, 2021|Consequences, History, South Africa|Comments Off on Health inequality and the 1918 Spanish flu

About the Author: admin